When I first shared these cinnamon knots on Instagram, people went wild. I had never been asked for a recipe so many times before. A great part of the excitement likely came from the novelty of discovering a new cinnamon pastry, something different yet also quite similar to the delectable cinnamon bun many of us know and love. Except these aren’t really new here in Norway – and I bet one can find wonderful local variants all across Northern Europe. 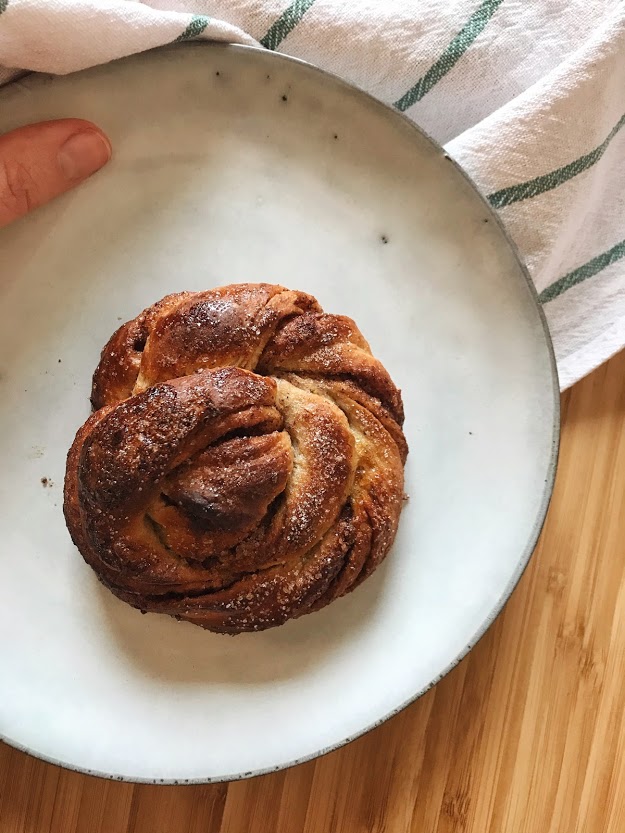 I won’t take any credit here because all I did was slightly adjust an existing recipe, but as it is written in Norwegian, I thought I’d translate and describe the process in English here. For a preview, feel free to watch me at work.

One tip, if you’d like to put a twist on these buns, is to swap out the cinnamon in the filling for cardamom. They won’t be kanelknuter anymore, but I promise they’ll be just as delicious.

for the sweet yeasted dough

for brushing & sprinkling the tops

for the sweet yeasted dough

1. In a saucepan on a medium-low heat, melt the 63g butter and pour in the 250mL of milk. Let the mixture come to about body temperature, 37°C (you can check this by carefully dipping in a finger).
2. Crumble the 25g of fresh yeast into a large mixing bowl, and pour over the milk and butter mixture, stirring as you go so the yeast dissolves. Note that the dough shouldn’t be too hot, as heat will kill yeast – so best have dough that’s a bit too cool, rather than too warm.
3. Knead in the 75g of sugar, 2 tsp cardamom, 1 tsp salt and most (but not all) of the flour together, either by hand or with a dough hook attachment. Don’t add in the all the flour at once, as you may not need it all. Add in the egg. Then, knead in the remaining flour little by little, until the dough is smooth and pliable and no longer sticks to your bowl.
4. Cover the bowl with the dough with a clean, slightly damp, kitchen towel and leave it to rise in a warm place for 40 minutes to 1 hour. While the dough is rising, you can make the filling.

1. In a small bowl, combine the 75g butter, 43g sugar and 2Tbsp cinnamon well using a rubber spatula.
2. Set aside.

1. Sprinkle some flour over a clean, dry surface and transfer your risen dough ball onto it.
2. Roll the dough out into a rectangle of about 20x50cm. Spread on a good layer of the butter, sugar and cinnamon blend, starting from the center and working your way out to the edges, using a rubber spatula, icing spatula, or even a cheese slicer.

4. Cut across the dough in slices about 1 cm thick and 2.5cm wide. Stretch each piece by gently pulling at its ends, then hold one end down on your surface while rolling the other end towards you, such that the dough thins a bit as it twists. Make a knot with your twisted dough by twirling the dough twice around two or three fingers and pulling the end through the gap left by your fingers. To be honest, you don’t have to be very precise here – as long as you get something that resembles a knot – but you can take a peak at this video to get a better idea of the technique.
5. Place the knots on a parchment paper lined baking tray, and let them rise under a clean damp dish towel in a warm place until they have doubled in size. This should take 30 to 60 minutes.

2. When the cinnamon knots have finished rising, brush their tops with a little beaten egg and generously sprinkle on the brown sugar (note: I only had white sugar and this also worked great).

3. Bake the cinnamon knots in the middle of the oven for about 8-10 minutes, until deeply golden, but before they are too brown. Let cool on a rack and enjoy!

The original recipe has double the ingredients and yields 20 very large cinnamon knots, so I imagine you could use the same quantities described above to make about 10 or 12 medium-sized ones. Because 18 small cinnamon knots was too many for two, we opted to freeze some in containers (after their second prove). The instructions are the same when baking from frozen – simply let the knots thaw a bit before baking. 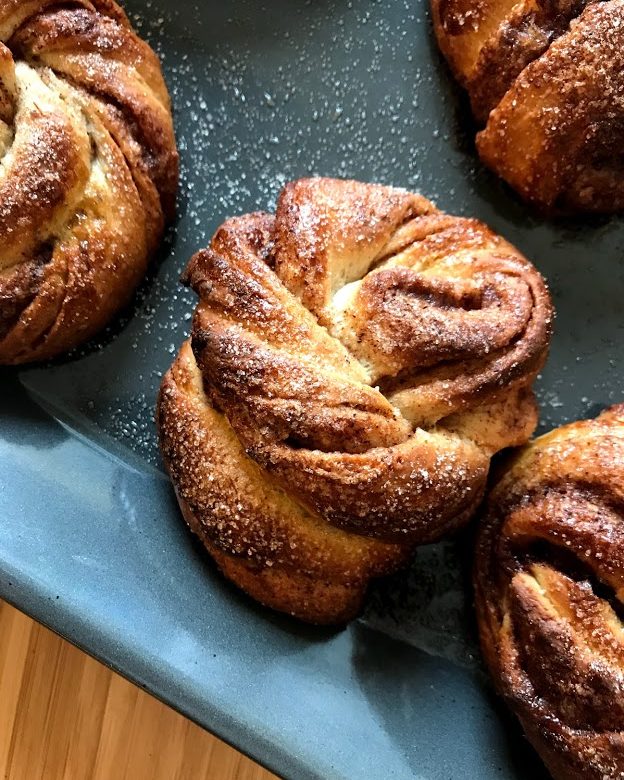 Finally, although the knots won’t require much effort from you (and eating them is most definitely effortless), they will need time to prove and bake and cool. So making them is likely to be more of a weekend activity than an after-work or after-school treat – though luckily, quick desserts are not impossible.

Oh, and if you’re ever in Norway, you really need to try one of these (made with local ingredients, and baked by professional hands). My favourite are from the bakery in Bagn.

leek latkes! oh so crisp and crunchy on the outsid

slowly settling in 🇫🇷 after three months at

a warm lentil salad with all the good stuff 😌 t

sign up for a monthly(ish) newsletter with exclusive recipes, meal ideas, tips & more!